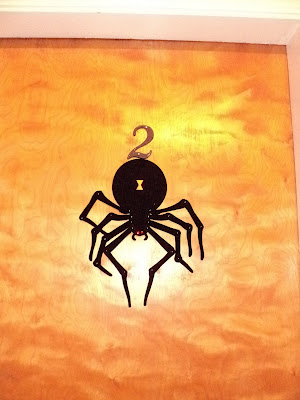 Couldn't resist. This is the decoration on my front door, received as a gift in the mail from my sister Su, today. I have named the charming arachnid Lady Long Legs on account of the gorgeous, shapely limbs that can be made to wiggle about. I plan to keep re-arranging them in the week ahead.
Posted by Unknown at 10:45 PM 1 comment: 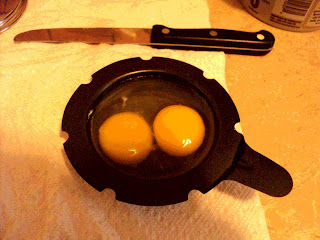 There's no way to prove this, but the eggs pictured here were actually ONE egg, with two yolks. I know, I know -- it's common enough -- but not for moi. So after the first couple of eggs I thought, "Hey wait! Why am I being cool about this? It's new for ME. Even if the whole rest of the world gets double yolk eggs for breakfast EVERYDAY, I haven't so far." So I took a photograph, with my usual ineptitude (just so that it's clear I'm not employing a professional) and have -- as you can see -- posted it here. I got about five double yolk eggs in a carton of 12 extra-larges. They tasted completely normal. I was SO disappointed!
Posted by Unknown at 12:18 PM 1 comment: 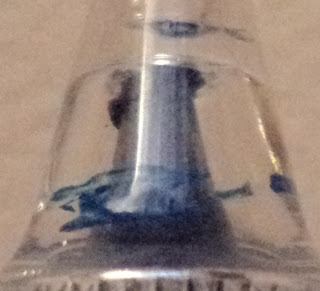 Five more pictures. Things seen around my house. Two are slightly unusual. To post guesses, scroll down and click on "comments"-- then scroll down again to see the input window. I monitor comments, so your response won't be instantly visible. 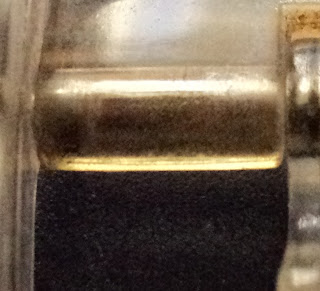 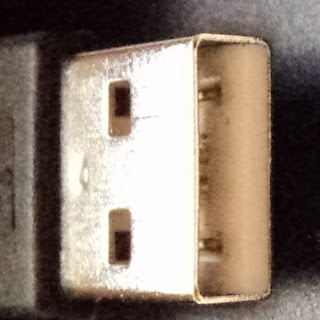 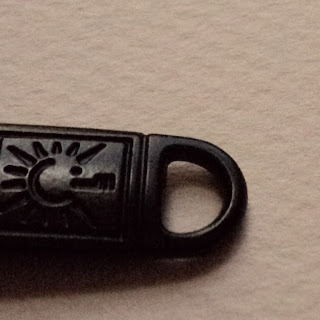 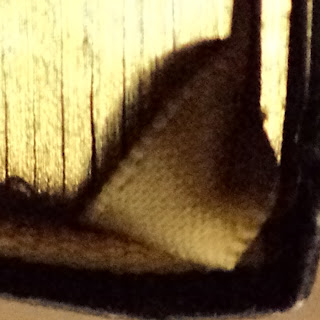 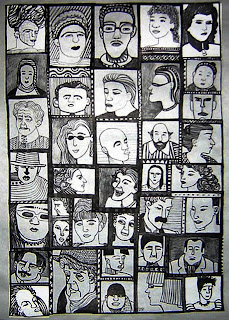 This is a lithograph I made at the Robert Blackburn Printmaking Workshop, under the expert guidance of master printer Devraj Dakoji, in 2009, in NYC.


The link will take you to the Zazzle.com site where you can buy a poster of the print. Also a tee-shirt -- though I'm not totally sure whether or not it's appeared in the "market place" yet.
Posted by Unknown at 1:40 PM No comments:

A Joke For Our Times

Got this joke from my most reliable source of Web Gold, AA (click to see the punch-line):

As it's no longer politically correct to direct a joke at any racial or ethnic minority, try this one:
An Englishman, a Scotsman, an Irishman, a Welshman, a Gurkha, a Latvian, a Turk, an Australian, a German, an American, an Egyptian, a Japanese, a  Mexican, a Spaniard, a Russian, a Pole, a Lithuanian, a Jordanian, a New Zealander, a Swede, a Finn, an Israeli, an Egytian, a Romanian, a Bulgarian, a Serb, a  Swiss, a Greek, a Singaporean, an Italian, a Norwegian, an Argentinian, a Libyan, a Nigerian, a Ghanaian and an Liberian went to a night club.

The man at the door looked at them and said, "Sorry, I can't let you in without a Thai.”
Posted by Unknown at 11:51 AM No comments:

This is so amazing I had to post it here right away, even though I will of course ALSO e-mail it to long-suffering friends and fambly who (I know) find my enthusiasm for Every New Thing just a teensy bit tiresome.

The video (click the post and the vid-interface will come up) features BRE PETTIS, CEO of MakerBot, a company that makes machines which permit people anywhere to print things out in three dimensions. For $1300. This isn't the first example of such wizardry I've seen, because this 3D printing revolution has been evolving quietly in the background for several years. But it's starting to spill out of the design stage and into our homes.

Several friends responded to Picture Puzzle #1 but only two managed to post comments (and one posted via me). I think there were a couple of problems: (a) it wasn't easy to find the puzzle because of my post about the World Tour Mystery (b) the "comments" button is not merely tucked out of sight, but you've got to click on it and then scroll down to see it. Which is a bore. This new template is still being tweaked, so maybe that'll improve.

Okay! I thought the previous pix were too obvious by half -- but I didn't know whether to make em more or less so. Based on that experience I ... STILL DON'T KNOW! Heh. So this new lot is easy too but I used the same background for four, which may help with scale issues. They're also common objects. But how common is "common"? In the previous set, I realized belatedly that #4 was coloured in a way that wouldn't be common in India. Anyway, here now are the answers to Picture Puzzle #1:

1) Popcorn -- i.e., one popped kernel
2) Postage stamp -- the wiggly edge between one stamp and its neighbour. They're self-adhesive stamps so the familiar perforations are missing. This, like #4, was location-specific. Also the stamp is not typical and the fragment of printing that you see is misleading. So ... my bad.
3) Cotton bud
4) Toothpick tip -- an ordinary wooden one, but blue
5) Burnt match-head (everyone got this, no surprise)

Below are five new pix. Complaints are welcome, BTW -- too easy/too hard/too blurred -- I'd like to know. I plan to do this once a week! So feedback is useful. As before, scroll down past the pictures to find the comment button. Click on it and THEN SCROLL AGAIN. I watch-dog them, so they won't post immediately. 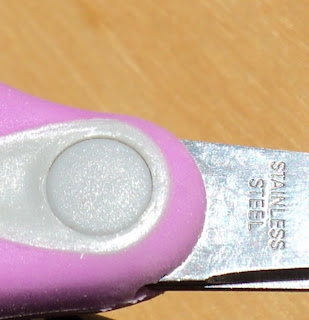 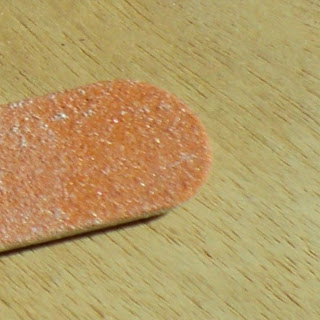 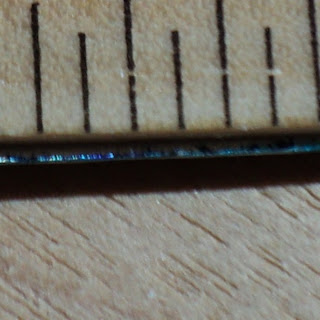 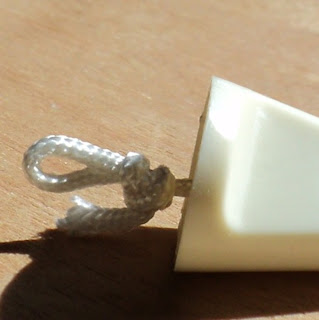 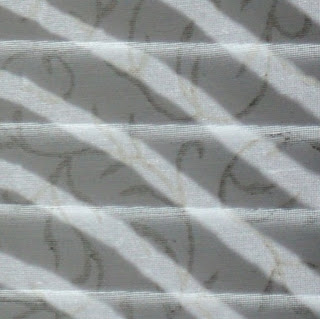 
TWO puzzles: one is in my most recently published book, THE WORLD TOUR MYSTERY (Tulika Books, Madras, 2011); the other one's right below the book-info, a very simple amusement I put together just for you, Unknown BlogVisitor.

THE WORLD TOUR MYSTERY
This is the cover and there's a description of the book at the link. But if you're feeling too lazy to explore the link, here's what I wrote, for Tulika's blog, about working on the book:

This book took shape in my mind mainly because of a party game we used to play when I was little. It was called Around-the-World: no game-board, player tokens or pictures of places and countries. Instead the names of cities were scattered through the house and the players were told to figure out the correct sequence of places on an (imaginary) world tour. Playing the game involved a great deal of running up and down and all around the rooms of the house, with much excited screaming and calling out of cities. The first person to get the whole sequence correct was the winner.

I enjoyed this game so much that I thought it might be possible to make it into a book. BUT … dearie me! It really wasn't easy. In my typical way, I started with the thing I wanted to do most: which is, to make drawings of some of my favorite monuments from around the world. Having done that, I thought, it would be quite simple to force the drawings to become a game! And also a book!

Of course, I was wrong.

Fortunately, Tulika's editors are very kind and also very patient. I actually completed one version of the book with big colored drawings of my favourite monuments. In the end, however, we all agreed that it just wasn't working as a book. So it didn't get published. We all felt there was something nice about the idea if only it could be worked out in some other way.

Well, five years passed. During that time, I worked on SAME & DIFFERENT, a sequel to I AM DIFFERENT!. Both books explore the ways in which sameness and differences are interesting subjects to think about. As the idea of the Monuments book continued to twitch and grow inside my mind, I and Tulika began to see that difference/sameness are a really important part of traveling too. After all, people in other countries look different and have unique local costumes,  yet -- as we see in the book -- tourists look the same wherever they go! When we line up to board an aircraft, we see hundreds of people, some young, some old, some funny, some strange: yet for all the differences, we can also see so much that's the same: we all drink water, for instance; little babies of all nationalities scream in the same language; and everyone looks grumpy if there's a long queue for the toilet.

The first big improvement was to create a puzzle based on the game but not really like it at all. You've still got to figure out the correct sequence of places on the tour, but by finding clues embedded in the pictures rather than by running around a house.  The next improvement was to imagine a family going on a trip – and then to think up names and faces and personalities for the members of that family. Finally, the family became the focus of the book and the monuments got fitted into the background. That's how the world looks to us when we go on a real sight-seeing trip: a lot of people in holiday clothes, with strange or interesting-looking structures in the distance.

So what we have now is a puzzle-book called The World Tour Mystery with lots to look at and amusing facts to read, as Mum, Dad, Aunt Mimi, Kooks, Bunny and Bobo travel around the world.

I hope you enjoy it as much I enjoyed putting it together! And maybe some day you'll go on a world tour just like it. 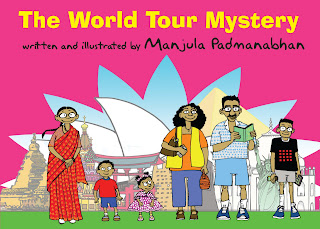 Guess what the objects in the pictures are. All very common. There won't be any prizes this time around, because it's too easy. But the next time around, who knows? 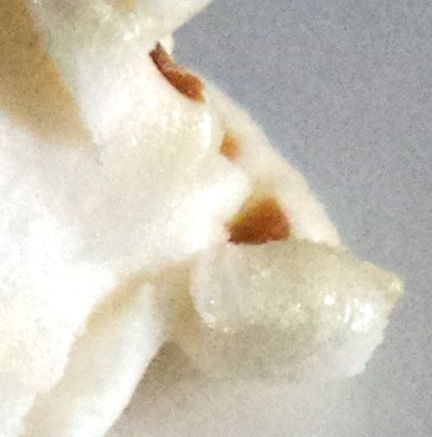 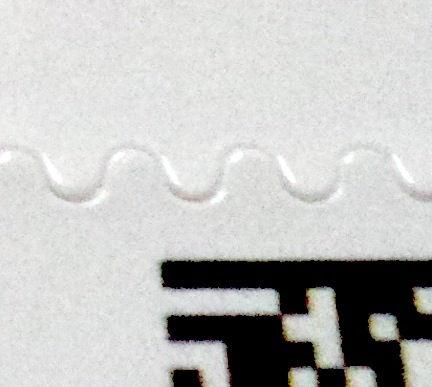 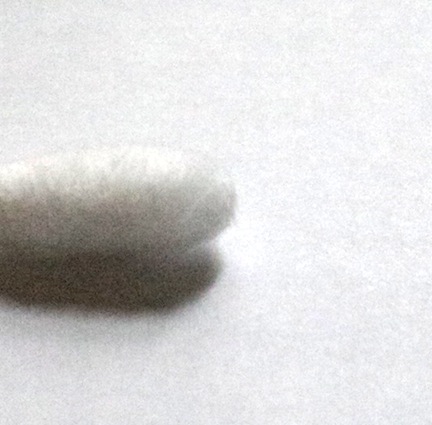 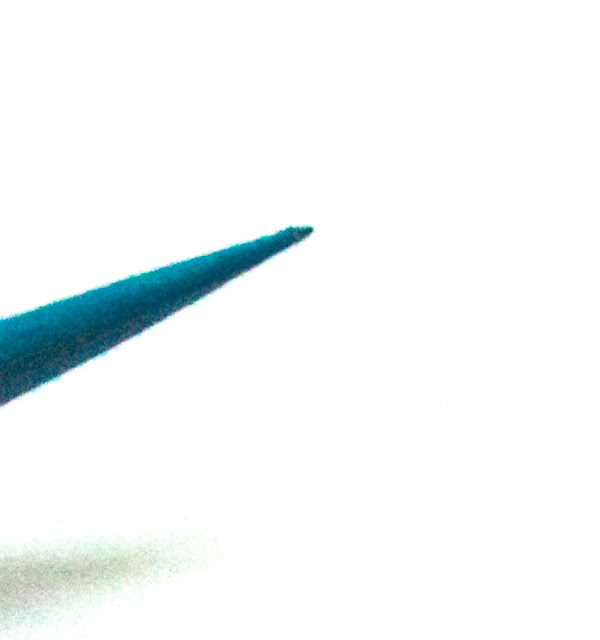 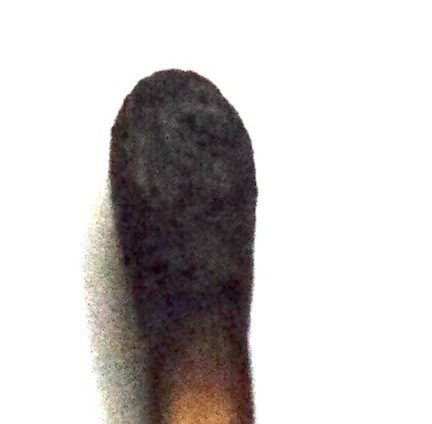