This is a snack idea I had the other day -- and tried out in Madras (I've just been there and back for a quickie visit). The snack is a quick-fix for sugar junkies, requiring very little effort and providing much amusement! I call it ...

Chunks of fruit – we used tinned peaches and dried cranberries. But any mouth-sized chunks of strong-flavoured fruit would be equally good: mango/sweetened strawberries/bananas – even dates, maybe

Dessert toppings – we used butterscotch syrup, but there's always chocolate, Cointreau, Kahlua, whatever … you could even flame a bit of brandy and pour it on!

Pani-puri puris – about six per head.

Set the chilled whipped cream (or softened ice cream) in a bowl and place that bowl inside a larger bowl filled with ice. All the other ingredients might be served in little bowls, the puris in a basket – and everything within easy reach of the diners. It's your basic mix 'n' match pani-puri experience EXCEPT … it's sweet! Lots of teaspoons, quarter plates, paper napkins and perhaps finger bowls too might be good.

What we did: punctured the puri, stuffed it with chopped nuts, a chunk of peach, a big dollop of ice cream, a goosh of butterscotch syrup – then POP! In the mouth and down the hatch.

Finally, a book I actually liked!

Here's a link to my review in OUTLOOK of Amitava Kumar's HOME PRODUCTS -- I was feeling quite pleased with my review (it being such a rare event, after all, to find that I have something positive to say) but my sister G tells me that she didn't find the review enticing -- in the sense of, she didn't feel moved by it to run out and buy the book. That's a real shame! So I'm trying to make up for that boo-boo (in case other readers had a similar response) here, by saying it out loud and obvious: I REALLY LIKED THIS BOOK!! Maybe one of the things I liked best was that it was cool -- it didn't sound like it thought it was the best thing since -- oh, come on, let's just trot out the cliche -- sliced bread. It just got on with telling its story without fuss, tantra or fanfare of trumpets.

I think I also liked it coz I liked the author photograph. This is a terrible confession to make. But it's a cool photograph, just like the book. I have no idea whether the original item (i.e., the author) looks anything like his picture or whether he consciously set out to look a little bit like Paul Theroux or whether anything about the picture is authentic. Author photographs are supposed to enhance the saleability of a book, but most often, I find, I react so badly to the highly posed and perhaps PhotoShop-enhanced likenesses leering out at the reader, screaming READ ME! READ ME! that nowadays I automatically assign a bad-mark to such books. If the book happens to be worth reading then, okay, the black mark gets erased. But if it begins to stink, then every little dot and comma that annoys me gets added to the black mark like a rolling snowball of disappointment.

It will probably not come as much of a surprise to hear that I haven't published pix of myself alongside the author-info in my books -- caricatures, yes, but not photographs (at least I don't think so -- I've forgotten whether or not the MOUSE books have pix of me on the inside back-flap). I wouldn't buy a book that had a picture of me on the back cover! I look like a podgy middle-aged nerdette, someone completely incapable of producing anything readable.

So I don't know: do author-pix help or hinder the sale of a book? Dunno.

MEANWHILE, here's another link*, this time to a short piece I wrote in CITY LIMITS after visiting
Anjolie Menon's recent exhibition.
*(and it happens to feature an ancient photograph of me, at least 10 years out-of-date. I no longer look anything like it! I think it was Kurt Vonnegut (or someone pretending to be him) who made the point that we might as well enjoy the way we look now because we'll only get worse, not better. This is all very well, but I can STILL never get used to the way I look now, whatever it happens to be. It's as if I've never gotten over my adolescent antipathy towards myself)
Posted by Unknown at 3:10 PM 5 comments: 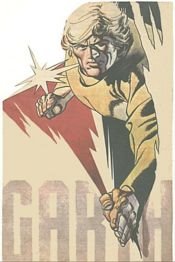 So all right, I've been playing hookie for ... umm ... okay, practically all month. But I've been BIZZY! Flexing the culinary muscle. Yes, you read that right: I, hitherto a stranger to kitchens (except as an Olympic-class dish-washer) have been secretly learning to cook a thing or two! It all began with a biryani recipe that my niece Meenakshi taught me in Madras and then, when I'd managed to wrestle it to the ground two weekends in a row, (i.e., I made it twice, on Sundays, the day on which the reigning lord of the kitchen has his weekly half-holiday) steamed ahead and made Channa Bhatura.

Okay! But! These amazements are as nothing compared to the one that has been revealed to me JUST TODAY. Okay, to explain, I have to step back several paces. If the picture at the top of this page is visible, then you already have the context -- i.e., the superlative adventure strip known as Peter O'Donnell's (better known as the creator of that OTHER superlative adventure strip, Modesty Blaise)
GARTH is involved. But here's what you don't know: I used to be a huge fan of that strip.

Undoubtedly, a major catalyst of my fanhood was my elder sister Surya's passion for the strip. She used to cut it out of the newspapers and carefully stick the strips together to make up complete albums -- this, despite our travelling childhood, when keeping track of newspapers and story-lines was quite a challenge -- which could be read like graphic novels. Tragedy struck, however when my sister's entire carefully collated masterpiece was lost by a friend of hers -- and since then, i.e., since the early seventies, we have been severely Garth-deprived.

I have made several attempts to locate a source of the series -- it used to appear in the Hindustan Times (which is the newspaper from which Surya clipped her collection) -- but to no avail, because it was discontinued just around the time I was living an existence settled-enough to be able to consider subscribing to a second daily paper, STRICTLY for the strip.

Enter Penguin(India). While engaged in idle chat with Someone Important there, about one year ago, I happened to bring up the subject of "GARTH: Unavailability To Sorrowing Fans". One thing led to another ... and ... believe it or not, this evening I was told that Penguin(India) is going to bring out a COLLECTED EDITION!!! I am so astonished that such things are even possible (i.e., that one can keep up a silent, long-term, desperate desire for something and actually GET it, at the end of a really long time) -- that it doesn't bother me that actual satisfaction is still several months away in the future. I am willing to be shattered into many joyous fragments just in the contemplation of this knowledge.