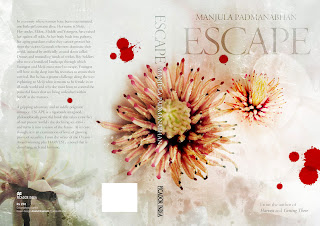 Escape
Okay. I can no longer keep it hidden: my new book, entitled ESCAPE, published by Picador India, is due out in the first week of November. I don't know at what resolution this image will appear (I have yet to go back and dig up a larger scan of Alice Albinia's book, featured in the post just before this one -- her cover was transformed into a miniature by the time it uploaded), but if it's normal, then it should be possible to read the back-cover blurb.

My editor has forbidden me to say anything even faintly negative about the book/its cover/myself -- which means I pretty much have to cork down right away. Well I suppose I am allowed to say positive things -- in which case I will confess to being really and truly relieved that I wasn't asked to produce a cover because now I ... ummm ... I suppose if I continue in this vein I will say something negative about myself. Okay, I've just GOT to finish that statement (yes, Shruti? Do you grant me that?) -- I realize that with most of my previous books, either I produced a cover that was utterly self-effacing or I refused to get involved in the totally awful covers that the publishers produced -- I will NOT, in this context refer to the title of the book whose cover was created by Picador UK, because it STILL gives me nightmares ...

I am glad to say that I find the current cover practically perfect (like Mary Poppins). Of course there IS something, one tiny thing, that I dis... uhhhhh ... okay! I'll stop right here. *sound of whip being cracked in the distance*

I'd like to draw attention to the blog newly added to my list on the left -- 30-in-2005 -- lively, feisty, frequently updated. I should've done it some time ago, following my own desire to showcase any site I return to regularly but laziness usually wins out over any other impulse in my world.
Posted by Unknown at 3:04 AM 10 comments:

Empires of the INDUS

Empires of the INDUS by Alice Albinia
This is an invitation to attend the launch of Alice Albinia's "Empires of the INDUS", the inaugural title from Hachette India. I don't normally feature invitations to book launches at my blog so ... explanations? Well, Hachette India's CEO is my buddy Thomas Abraham and the author, Alice Albinia is someone I met many years ago, in Delhi. She had that quality of youth and freshness that made it possible to believe -- just very briefly -- in the idea that the world might be a rather nice place after all.

I haven't read her book, but I'm sure it must be brilliant because -- I cannot tell a lie -- because she e-mailed to invite me to the launch and in her message, mentioned that she'd quoted a passage from my book GETTING THERE in her book. Well! That's certainly never happened before and probably never will again: that book sank out of sight so fast it's hard to believe it was ever published. I can't help but feel Albinia's research must be very thorough indeed ...

Thomas says it might be worth carrying an actual copy of the invite to the Brit Council, security concerns being what they are these days.