This is a comment piece that appeared in OUTLOOK Magazine about a bizarre birthday gift: a cake in the shape of a SLUM. There's more about it HERE, including a photograph of the cake, tweets generated by the birthday party and then tweets in defense of the cake from the host of the party. London's the GUARDIAN also weighed in with a comment piece by Pervez Sharma.

This week I heard that a well-known Mumbai actress received a birthday present from her husband, of a cake in the shape of a slum. That’s right, a slum. It is reported to have been created with shanties, pipes and a road sign with the celebrity’s age displayed as its “gali number”. The first reaction that went through my head when I heard this description was, “Imagine even pretending to eat clogged drains and sewage!”

But the more I thought about it, the more difficult it was to say exactly why I found the idea nauseating. For instance, would it have been okay if something bitter and hard to chew had been created rather than a sweet and creamy luxury item? Or is it mean-spirited to assume that a slum would NOT be delicious to bite into? And by the way, is it inherently distasteful to think of eating up whole neighbourhoods? Or is it only distasteful when the neighbourhoods are not well-maintained? I can remember, for instance, that for my sixth birthday the party theme was clowns, with a cake to match. At my 10th, I helped decorate a cake in the shape of a medieval castle, with ice-cream cone towers. Does this mean that my family was grotesquely insensitive about medieval royalty and circus entertainers? Or is it okay to eat delicacies fashioned into symbols associated with wealth and pleasure while confectionery in the shape of destitute neighbourhoods must be condemned? And is that because we believe the destitution is unacceptable or our willingness to admit it exists that must be avoided at celebrations?

The more I thought about the thing, the more questions my mind generated. For instance, would someone, child or adult, who asked for leper-shaped desserts be considered depraved? Or would we think they were socially mature and responsible? Then what about pornographic puddings—would they be considered inappropriate at a child’s party? And does the shape of a birthday cake raise awareness? Or breed insensitivity? Would it be acceptable if, when a cake were made for someone who didn’t live in a slum, the dwellers had been invited in to eat it? Or is it so obviously offensive to make a dessert out of the visible symbol of the nation’s social inequalities that there’s no level at which inclusion becomes possible?

Is there anything that the revellers could have done that would have made it less objectionable, such as providing clean drinking water to a slum for a month? Or would only a full year’s supply make it okay? And would that be considered a responsible approach to lavish celebration or would it be tokenism to assuage guilt? Would it show a greater sense of humour and/or irony if there had been candles in the shape of slum-dwellers? And if it turns out that the slum-dwellers had benefited in the manufacture of the cake would that have made it all right? Or would the shape of the cake be okay if it had been made in order to be raffled and the ticket money given to the homeless?

The husband of the 60-year-old birthday baby is reported to have accused cake-critics of being humourless. The couple is known for their support to worthy causes and in particular to pavement-dwellers. So perhaps they should have responded to the criticism by gifting the residents of the slum closest to their residence a cake of matching size, but made in the shape of their own apartment building. Or—here’s a radical idea—how about cakes in the shapes of politicians, made to be eaten by their opponents? Religious icons too! And would that result in cake-eating becoming a politically charged activity with opposing parties ostentatiously gobbling up the religious icons of their enemies? Might we be entering an era of cake-wars? And would anyone who pointed fingers at those who objected to such activities be told that they lacked a sense of humour?

In the end, there’s no way of policing or legislating such things. People of conscience must know in their hearts whether or not they’re using a symbol appropriately. If not, it really doesn’t matter whether they are leftists eating slum-shaped cakes or anti-abortionists eating foetus-shaped eclairs. The moral of the story is, you can’t have your ideology and eat it too.
Posted by Unknown at 5:26 AM 1 comment:

This review THE FINKLER QUESTION by Howard Johnson appeared in Times of India's CREST. It's a subscription site, so you'd have to log in to read it there. Anyway, here's the review (this is my version of the review. The print edition may differ in small ways -- the title for instance):

There are some books that make me want to lie flat on the floor and howl. Not with fear or laughter, but the sheer tedium of having to plough through them. If this one hadn't been expressed in such elegant and well-turned language, it would have been easier to ignore. So alas, part of my complaint against the book is that its author Howard Jacobson writes so well that we can see the emptiness at the heart of his novel all the more precisely.

The story revolves around Julian Treslove. He is presented as the type of human being who should have been drowned at birth, like an unwanted kitten ¬– except of course that would only have lead to a novel being written in the voice of an exceptionally annoying phantom. We are told that Treslove has no qualities to recommend him: unreliable as a friend, disloyal as a lover, uncaring as a father as well as monumentally sentimental and romantic. The cherry – or do I mean the eye-ball dipped in red dye? – on top of this dismal list, however, is his obsessive fascination with Jewishness. He is the one who considers it an affliction, in part because he isn't a Jew, in part because he considers his entire existence to be an affliction. The question that gives the book its title is based on Treslove's use of the name "Finkler" as his personal code-word to mean "Jew". The novel's ultimate theme is about what it means to be Jewish in a post-Holocaustian world, where yesterday's victims are today's terrorists and tomorrow's front-page corpses might be yours, mine or the Palestinian family's next-door.

Treslove's two dearest friends are Jews. Samuel Finkler and Treslove were in school together while the nonagenarian Libor Sevcik was at one time a teacher to both boys. At the beginning of the book, Finkler and Libor have both lost their wives. Libor's marriage was long, loving and intensely loyal, Finkler's was shorter and riven with infidelities – marital, ideological, intellectual. It is through Libor that Treslove meets Hephzibah, the woman who most fulfils his notion of Ideal Life-Mate. But his relationship with her is so compromised by his self-image as a cultural chimaera, a gentile Jew, that he ceases to maintain his integrity as a convincing character. It's enough that the world has Israel, Palestine and Woody Allen's New York-style neuroses to contend with. The spectacle of a non-Jewish Englishman moaning about the angst of not having Jewishness to moan about is too absurd to be funny and not pathetic enough to be interesting.

Perhaps one of the reasons I found the novel merely self-indulgent rather than insightful or poignant is that I already know, as an Asian belonging to a post-colonial nation, a fair amount about the inclusion-exclusion game as it is played out in urban situations around the world. Through Treslove's character, Jacobson seems to want his readers to re-explore the notion that the Jewish version of this game is still the most riveting one around. But it no longer is for me or, at least, not in the hands of this writer. According to the back-cover blurb this is a "scorching story of exclusion and belonging, ageing, wisdom and humanity … funny, furious, unflinching …' And it's on this year's Man-Booker Prize shortlist. Brrrrr! The longlist must have been grim indeed.
Posted by Unknown at 5:02 AM No comments:

It's very unusual for me to express any thoughts in the form of a poem. But here's something that might be called a poem. It's an image-file, not a document (because I wanted a coloured background) so if the image looks like a miniature with ants crawling across it, click on it. That should cause it to pop up in a separate window and at full size.

This illustration was commissioned by OUTLOOK TRAVELLER to accompany an article by LUCY PECK about Delhi's monuments. I am usually disappointed when I see my work in print but I think this one looks rather sweet in the current issue -- I don't think the issue's been uploaded to the net yet but it's on the stands. The illustration looks a little different in print because I created it in two versions, stacked (as it appears here) and also as a border across two pages (as it appears in the magazine).

Ah -- and here's a link to the article itself, THE OLDER DELHIS. 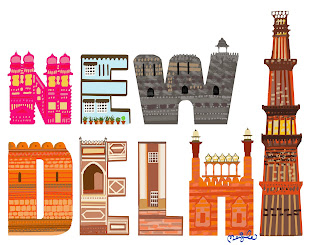 and am still tingling with pleasure. I have always liked Theroux as a writer and look forward to his books but for some reason never got around to reading this one when it came out in 1998/99. Perhaps because I was not interested enough in VS Naipaul to care that they'd apparently had a falling out; perhaps because the reviews suggested that Theroux exposed himself as spiteful and small-minded while criticizing a famous lit-giant.

I am glad now that I waited to read it because in the intervening years I have read several new books by Theroux but only the odd word or two by Naipaul. The fact that the latter was finally awarded a Nobel changes nothing: I don't choose my reading based on prizes. I read 'SHADOW as if it were a murder mystery -- but with a friendship rather than a corpse at the heart of the mystery.

I would say that it's a must-read for anyone who is interested in books and literature, in writers and their lives. Theroux does expose himself -- and that is what makes this such an unusual book -- it's like reading the diary of an intelligent, well-read and sophisticated lover who has been jilted in the most atrocious way and then, in the way of ALL lovers, intelligent or not, cannot stop himself from screaming his heart out. The entire book is a very well-articulated, superbly crafted scream of deep, unquenchable heart-hurt. The pain of a lost friendship IS often more unbearable than the loss of romantic/sexual/conjugal love because it very often involves betrayals at levels that the loser does not even know existed until they are revealed.

It is a wonderful book, better than any fiction. Go on, then: run out and buy it/borrow it/read it AT ONCE.